A master of turning everyday vegetables into culinary delights, Bruno transformed local grown mushrooms, eggplants, cucumbers and honey into his City of Logan-inspired signature dish, a mushroom and eggplant pattie, with cucumber and herbs, in coconut yoghurt, served with chilli-infused honey.

The dish was served throughout the weekend at the Logan Menu Hub which had a constant stream of visitors to the jam and cheese making demonstrations, Poppy’s Chocolates, Bee All Natural Honey, Kenon Mushrooms and Carcamos Gourmet Caramel Apples.

As a major regional producer, the City of Logan had its own food precinct with local producer stalls, and a food truck serving local specialties, including Bruno’s signature dish, prepared by Yarrabilba’s favourite chef, Fiona Robieg, from Thom and Ann’s Restaurant Deli.

Logan’s producers are now gearing up for an influx of visitors, encouraged by food experience vouchers, and a new A Taste of The City of Logan recipe book, highlighting food and beverage recipes from Bruno, local Logan Entertainment Centre Executive Chef Adam Gleaves, and other local eateries. 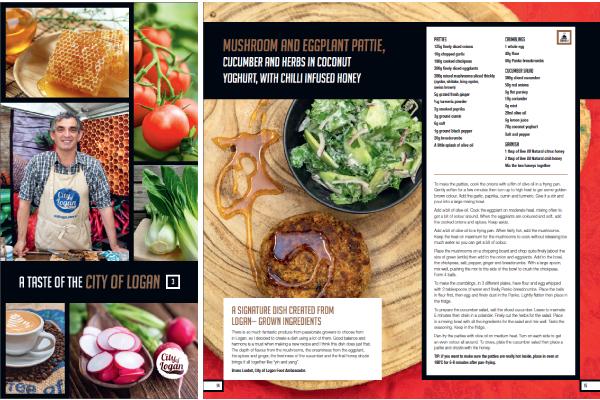 A digital version of A Taste of the City of Logan Recipe Book Series 3 is available. Printed books will be available free at Council offices and Eats and Beats events.