With significant existing infrastructure to service a growing population, including a major hospital, major tertiary education facilities, growing housing stock and major transport links, Logan is well-positioned to support the growing South-East Queensland region and attract a wide range of industry and development.

Estimated Resident Population is currently 341,985 (30 June 2020), with projected population to exceed 500,000 by 2036. Logan and neighbouring Ipswich are predicted to grow more (by percentage) than any other council region in SEQ in the next 20 years. Two of Queensland’s Priority Development Areas (Greater Flagstone and Yarrabilba) will be home to 170,000 people in the next 20 to 30 years – slightly less than half of the city’s total growth.

The City of Logan is a growing residential area, with substantial rural, rural-residential, commercial and industrial areas. Logan encompasses a total land area of about 957 square kilometres. Rural areas are located mainly in the southern, western and eastern edges of the city.

Logan has a labour force of around 163,000 and access to a regional catchment of over 3 million.

An analysis of the output by industry sectors in the City of Logan in 2019/20 shows the four largest industries were:

In combination these four industries accounted for $8,784 million in total or 49.8% of the total output by total industry in Logan.

City Pulse provides up to date data on land use, development and building activity for the Logan Local Government Area.

City of Logan Demographic and Economic data from id.profile

Demographic and Economic data for the City of Logan can be accessed via economy.id, which provides access to a range of different datasets to build a cohesive story of the local economy, how it is changing and how it compares to other areas. Information on economy.id is useful for Logan businesses, investors, and not-for-profit organisations to aid decision making and to help with reporting, grant writing and marketing activities.

Logan Office of Economic Development has established a Global Connections Strategy with the purpose of further developing economic development and commercial benefits. This will be achieved by ensuring that business, industry and the community benefit from targeted international economic development activities.

Logan City Council is committed to generating strong, long term relationships between the City of Logan and international partners. Sister city and economic and friendship agreement exchange activities include ongoing student exchange programs as well as new initiatives in the fields of culture, business, education and government. 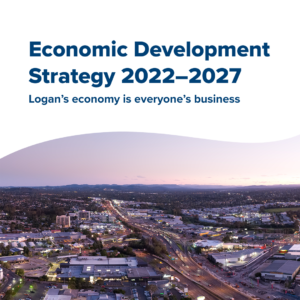 The Logan City Council 2022-2027 Economic Development Strategy sets out actions to promote and create opportunities for businesses, encourage investment, increase employment and generate prosperity for the City of Logan.

The Employment Lands Strategy 2020 sets out Council’s vision and strategy for employment land. Key objectives of the strategy are to optimise employment land, to facilitate existing and new business and industry opportunities, and to provide employment choices for Logan residents.